Employee advocacy within the Adecco Group.

The Adecco Group is the number one Human Resources service provider in the world. They are the oldest member of the recruitment family with more than 5,100 agencies in 60 countries around the world.

No matter what sector, the 33,000 Adecco Group employees are committed to bringing companies and talents together.

The expectations & objectives of The Adecco Group

Together with Social Seeder, 3 objectives were defined: 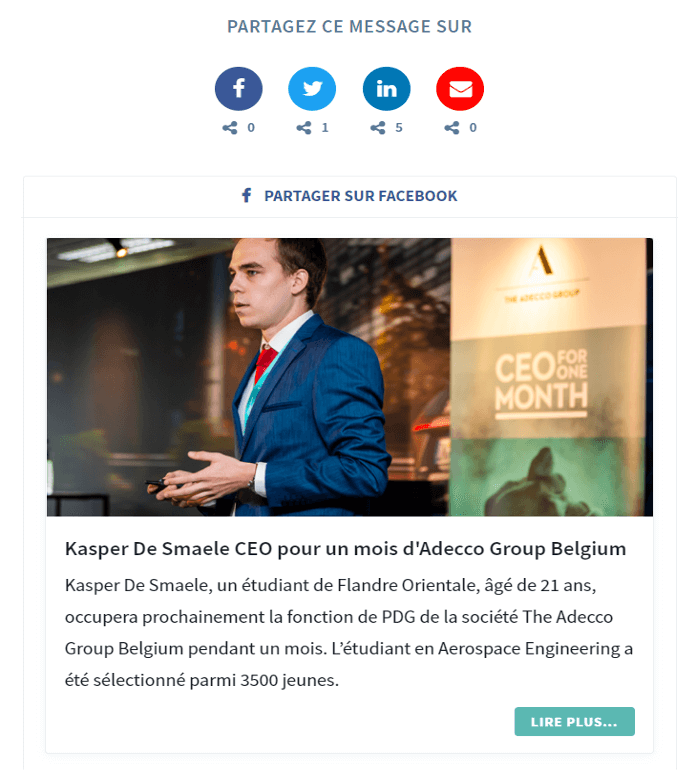 How was the employee advocacy program implemented?

1. Recruiting ambassadors for the Adecco Group.

Initially, an email was sent to all their employees to introduce them to the program and invite them to become an Ambassador.

After that, they used their intranet to recruit and introduced Social Seeder in their digital training courses. Besides that each new member receives information about the program on their first day at work.

Management was the first group that brought together the other team members to enter the Employee Advocacy program.

At the start of the program:

At the moment the Adecco group has:

Facilicom Group has been working with Social Seeder since 2016 to release the power of employee advocacy. The results of some campaigns we will share ... END_OF_DOCUMENT_TOKEN_TO_BE_REPLACED

Guidion started working with Social Seeder in 2018 to release the power of employee advocacy. The results are impressive and we’ll share them with ... END_OF_DOCUMENT_TOKEN_TO_BE_REPLACED

Become part of our inner circle

Of course you can! Leave your name and email address and we’ll share new content with you on a regular basis. Sign up and stay apprized of the latest insight.